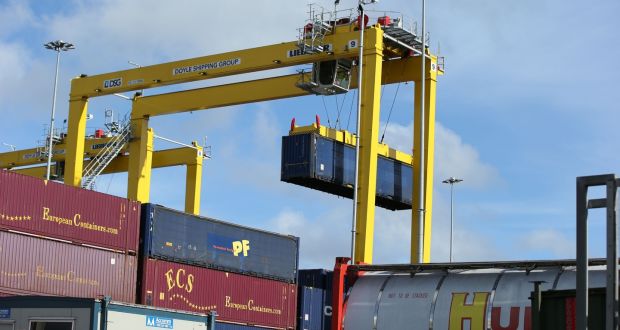 The value of Irish goods exports soared to a record €165 billion last year despite the disruption to global trade caused by the pandemic.

The full-year figures for 2021 show trade with the UK has been impacted by Brexit, however.

Since the UK’s departure from the EU on January 1st, 2021 firms have faced increased customs requirements.

Marks and Spencer (M&S) said last year that post-Brexit rules and “excessive paperwork” has forced it to cut about 800 lines from its stores in the Republic.

But the fall-off in imports has coincided with a significant uptick in cross-Border trade on the island of Ireland.

The figures show imports from Northern Ireland increased by 65 per cent to almost €4 billion in 2021, while exports from the Republic into the North rose by 54 per cent to €3.7 billion.

This means goods moving between Northern Ireland and the Republic are not subject to customs checks.

Fine Gael TD Neale Richmond said the Northern Ireland Protocol had seen trade on the island of Ireland grow by 65 per cent, and further growth must be facilitated through closer co-operation of trading agencies on the island.

“Over two years into Brexit, the changes in trading patterns are beginning to truly bed in,” he said. “Businesses and traders have shifted their trading patterns to the path of least resistance and are focusing their goods in the internal EU market.

“This is crucially important as just because North/South political engagement has been parked due to a short-sighted political decision by the DUP does not mean that we cannot continue to grow the all-island economy.”

There is clearly an appetite for businesses to grow these trading links, North/South and indeed East/West, he said.

The CSO noted that the strong performance in exports overall was driven by exports of medical and pharmaceutical products. These accounted for 38 per cent of all merchandise exports last year, valued at €62.6 billion. Exports to EU countries, which account for 37 per cent of total goods exports, fell by 4 per centto €61.5 billion.

Imports of other transport equipment, including aircraft, were valued at €14.4 billion, or 14 per cent of total imports.